Third attempt; tweaking the design and a comprehensive build video. Very happy with this version.

How to build the mini version (This kit is available on the website).

Someone was Throwing out a 15" VGA monitor, SOOOOOOOO I had to revisit this again.

I made a few improvments, mainly cleaning up the power input and adding a on/off master switch. NEO GEO FTW!!!!! 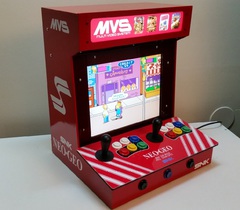 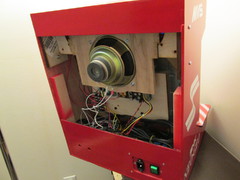 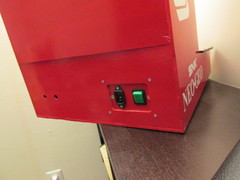 4.5" Speaker was salvaged from some bookshelf thift store speaker something, power supply for all 12v/5v DC was a PSU for an extrernal CDROM, like an old one external drive. I am pretty happy with the proportions of this one. That size speaker is not ideal for the setting, high pitch chip tunes, but it has some deep bass on SNK games.  The speaker magnetic ring extends outside the rear of the cabinet, but show me an arcade with a nice rear and I will still not change it. I didnt take many photo's of the build, it's identical to above. 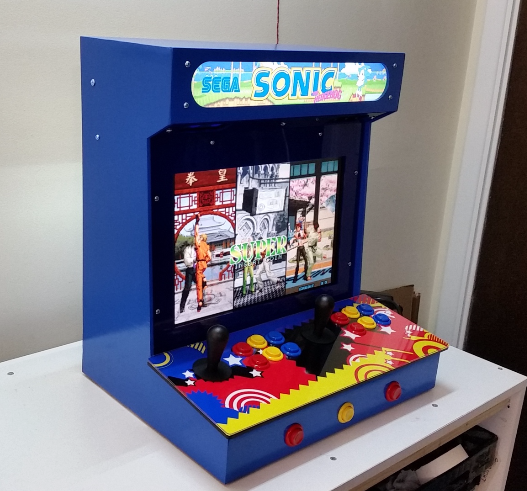 I've been selling the Porta Pi Arcade for around for 2+ years now. No less than once per week I get the email/twitter question " Do you have a 2 player kit?" I understand the demand for a two player kit similar to Porta Pi Arcade design is there.

I have tried a few two player iterations based off the Porta Pi Arcade. See them here. But I wasn't happy with them.  I get it, The way to play games is with a friend. There's no denying the social aspect of video games. Plugging a USB controller into the back of your Porta Pi Arcade for a 2nd player is only a 'satisfactory' solution.

There are a number of DIY 2-player kits on ebay and other websites These are all CNC router cut, with a physical cutting bit on a large wood cnc machine. You get the wood panels and you are on your own. Whatever obstacles you encounter are up to you to solve. Making assembly streamline was the whole reason the Porta Pi Arcade came up. I hated the unpredictable nature traying to build an arcade was. The monitor doesnt fit right, the control panel is angled weird.... you get it..

I've built a few 2-player wood MAMEs based on a 1/3 upright arcade size using a large CNC router. My experience with this (cutting my own designs, with parts design around them) is well, it's not nearly as easy my Porta Pi kits. So that leaves us at an impass between two options.

Recently I came across a 17" VGA monitor destined for the garbage. I figured another experiment was in the forecast to try a 2 player laser cut kit. Goals are:

First thing I did (and do whenever I start a new arcade design) is tear apart the monitor to see how I can mount it. 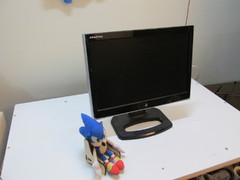 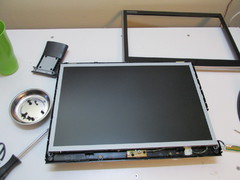 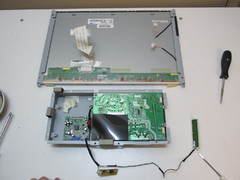 With the Monitor panel bare, time to take measurements and draft out a design. The thing that always saves me scraps is make a 3D model from my 2D design. It's the measure twice cut once effect.  Only issue I can forcast with my method of sandwiching the LCD panel. This monitor has a MFG date of 2008, it still has cold cathode tubes for the backlight. This means its fatter than mordern LED backlight displays, and a bit more of a power hog. The thickness is my main concern, as its heavier and requires more  material / effort to mount. 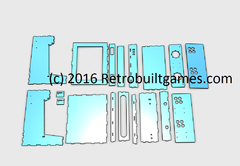 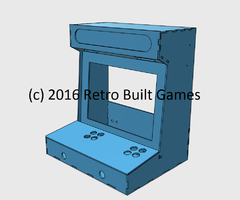 Why don't I have two player kits? The short answer it's the space it takes to stock and the time is takes to cut said kit. Not supplying a monitor aside, the wood parts take up some space. This one is no exception. This test required 8 sheets to laser cut. Each sheet is 16x24inches (biggest the laser I have access to can handle. Throw in a 9th sheet if you don't want the arcade to have an exposed back. And bump this total up to 11 sheets when you account the acrylic covers. Laser cutting essentially a 4x8ft sheet worth of parts took about 90 minutes. Yes a larger machine would save time. Let's not forget the price of those machines.

The very first thing I do when cutting starts, test the fit of the LCD. I cut out the LCD bezel and it's related parts. Make sure the measurements are right (they weren't the first time) and verify things will stay put. The biggest question I ask when mounting the LCD is "is this stupid?" I tend to make this part overly complicated. I am happy to say I kept things simple. 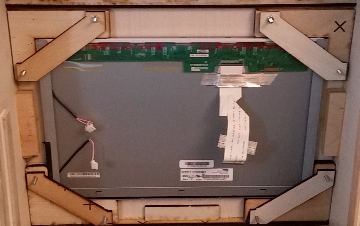 LCD mount was OK, so I continued cutting all parts. One the same day I decided to assembled the shell. I had to glue this up at Techshop, as I didn't have clamps long enough for the width of this arcade. And I needed all the clamps I could get. 1/4" plywood doesnt like to stay perfectly straight. Especially if it isnt stored flat (Looking at you Lowes, fix those shelves!). Once cut you essentially add 'reliefs' to the wood and a small warp becomes a huge bend. Again, gluing this together was a pain in the ass. I wouldnt expect someone else to have a good time. IWithout the number of arcades I've built, this would not go well for beginners. Another mark against this type of kit. But we must press forward. I would have taken photos of this step, but I was overcome with "this is going to be a fugly cabinet" doubts and didn't think I'd get past the glue-up.

Just looking at the body glued, considering the added weight and stress the machine will see from added parts and actual use, I decided it needed some internal framing for strength. I cut some scrap wood to add to the skeleton frame. This took another day as I wanted that glue full strength before I throw the thing around for sanding. Gluing these reinforcing peices was also a pain, as even I thought "yeah i think i have enough clamps for this". The reality was no. 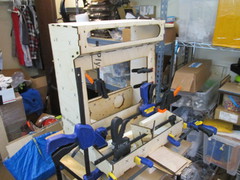 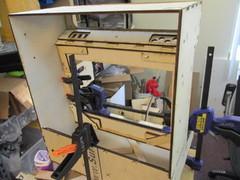 Shots of the glued cabinet next to the JAMMA arcade Kit. It's slightly larger to say. 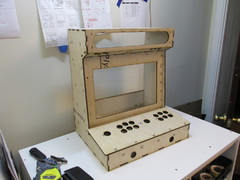 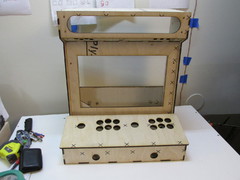 It was at this day we breached the point of no return. It will be finished. I endded up scrapping the shown control panel and recut one that was 0.5inches longer. That extra half inch makes the difference ;)

Sanding and Priming begins. No photos of that because it's boring for both of us. Fast forward 3-4 days... Shown is the painted cabinet. Guess who turn 25 years old this year?! That's the theme I went with. I spent an entire day making artwork, because passion, that's why.

The Pandor's Box 4 was an easy solution for this arcade.  With a pre-made JAMMA harness time to wire controls is quick. Ended up adding a middle button on the front for coin/ credit input.

Mounting the rest of the monitor's guts. Power circuit and driver board. Kept things simple.

Installed the marquee. I made a special adjustable wood peice. This pushed the marquee into the frame. Such a long span with thin plastic tends to bow away from the frame. This fixes that.

Next is wiring speakers, marquee backlight and general wiring. It looks complicated only because there's a switch (on the front of the cabinet) to independantly control the amp, backlight, and power to JAMMA PCB. Didn't need all these, but I cut the holes so might as well put switches that do something there. 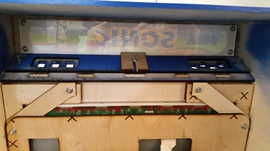 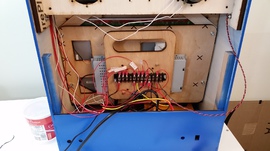 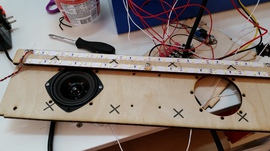 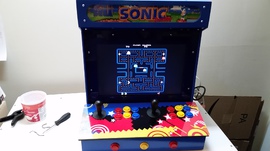 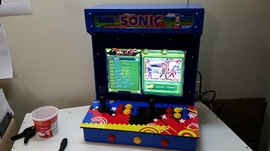 I will [probably] eventually combine the two cords into one cord solution. Currently its a two plug machine; Monitor power cord, and everything else power cord. The inside doesnt have much room, so I'll be putting off that task because...it's never fun. Sure there are no Sonic games on the Pandora's Box, but I like the theme. So much I made a Porta Pi Arcade version with a RPi :)

It's a little labor intensive to glue such a large and unforgiving kit together, but it can be done. I'll gage interest from here to see if it's worth moving forward to supply a wood panel kit in this size. If I do, expect the monitor bezel panel to NOT BE CUT. That way you can cut the opening to fit whatever LCD you want to use. Likely for 15"-19" sizes monitor.

I am curious what you guys think of this comparted to the 2-player DIY MAME kits outs there.

I am debating what artwork to make for the sides... 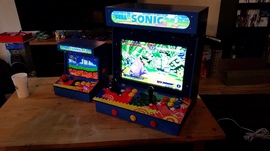 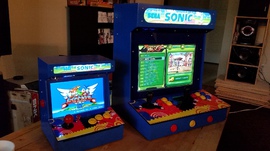 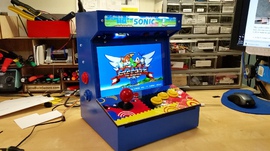